According to the European Commission, passenger transport is projected to increase 42% by 2050, and freight transport up to 60%. Needless to say, this puts an enormous burden on transport networks and our environment. Compared to other modes of transport – which often face congestion and capacity problems – inland waterway transport is characterised by reliability, energy efficiency and a capacity for increased use. More than 37,000 km of waterways connect hundreds of cities and industrial regions in Europe. In the EU, 13 countries share an interconnected waterway network, highlighting the potential for increasing the modal share of inland waterway transport. This will not happen unless we can make inland waterways economically competitive. However, with crew costs accounting for 60% of the total cost, autonomous inland vessels represent an exciting disruptive technology.

AUTOBarge is about seizing an opportunity. Europe’s waterways are a vital resource that we have underused for most of the last century. Now, with the possibility for mass autonomous shipping, these canals and rivers offer a network that we can exploit without damaging the environment to the extent of new roads and aircraft runways. But to be able to do this we need new people with new skills. These innovators must be experts in remote control, monitoring, smart logistics, regulatory aspects, and many more areas associated with the complexity of inland shipping. The 15 early-stage researchers recruited to AUTObarge will begin this transport revolution.

The European training and research network on Autonomous Barges for Smart Inland Shipping will:

The AUTOBarge Beneficiaries are 7 universities, KU Leuven (BE), UA (BE), TU Delft (NL), NTNU (NO), NORD (NO), CUT (SE), UHAM (DE), 2 high-technology companies, PERI (BE) and KM (NO), and 1 non-university research institute, IDIT. The consortium is completed by 10 Partner Organisations that include 4 companies, 3 non-university research institutes, 2 network/stakeholder organisations, and 1 governmental organisation. AUTOBarge unites some of the best and most relevant of European industry and the key academic players, guaranteeing not only an exciting interdisciplinary, intersectoral research-and-training programme, but also a head-start for bringing about the successful application of autonomy in inland-waterway transport. 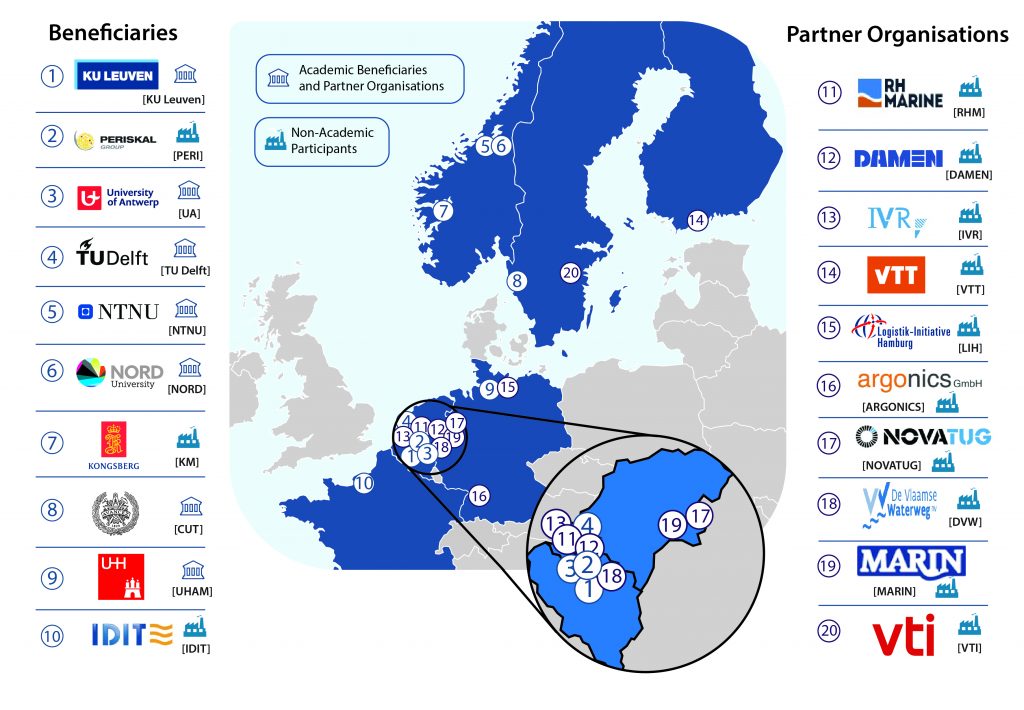 AUTOBarge offers the first-ever training programme for the application of unmanned or autonomous vessels for smart inland shipping and their role in the overall multi-modal transport activity in Europe. The interdisciplinary needs required to realise AUTOBarge’s overall aim are of such complexity that we see a large training network involving some of Europe’s flagship companies – such as Kongsberg Maritime and Damen Shipyards – together with leading European universities in the field – like KU Leuven and NTNU – and industry-oriented research organisation – among which IDIT and VTT – as the best way to tackle the related Scientific/Technical (S/T) challenges, which are briefly described as follows and which will be the aim of the project’s three Scientific/Technical (S/T) WPs:

Challenge 1 (WP1): Maximize the situational awareness (Sense and Understand) of an unmanned or autonomous inland vessel by covering the state and manoeuvrability of the vessel itself, the location and motion of other vessels, other relevant static and moving objects in the vicinity, features like buoys or traffic signs, as well as the wireless communication of information between the different waterway actors.

Challenge 2 (WP2): Exploit the above situational awareness (Decide and Act) obtained for a safe, robust and energy-efficient path planning and motion control of the autonomous inland vessel with a focus on model predictive control, control methods supported by real-time machine learning, energy-efficiency, and fault identification and isolation schemes such that those do not affect the operation of autonomous vessels in a negative way.

Challenge 3 (WP3): In-depth analysis of the socio-technical, economic and legal aspects that are needed to make autonomous inland shipping a success in the near future, including safety assurance, collaborative decision making for maximized performance, logistics, economic benefits, and the required changes to the regulatory framework.

Each of the 15 ESRs will be working towards a PhD degree, supported by a carefully chosen supervisory team that maximizes scientific excellence as well as interdisciplinary and intersectoral collaboration. Indeed, the supervisory team of each ESR comprises two academic supervisors, chosen for their scientific expertise and wide-ranging supervision experience, and one non-academic supervisor, chosen to ensure that the research always remains relevant for real-life business cases. Moreover, each supervisory team covers at least two countries and, in some cases, even three. This triple-supervisor approach, from which all 15 ESRs will benefit, provides them with an optimum blend of support and feedback, giving them the opportunity to gain experience and see any problem from both the industrial and academic perspectives.

Back to top button
Close
Close